"Mama, I love her so very much," my son confesses yesterday while sitting outside in our community garden.

"Mama, where do you think she is? I want to play with her. We used to go to daycare together. She is my best friend."

"Mama, which friend do you think she is playing with right now? Can you call her?"


And did I mention my son is 4 years-old? No, not 14 because I thought I had until he was at least 14 to deal with this subject. Nope, he is head-over-heels in love with the girl-next-door and he has just started pre-school.

And its not cute puppy love, its full blown stalking, obsessing, emotional madness you would expect from a hormone controlled teenager. I'm not exaggerating: he would only go to sleep last night after I threatened that he couldn't see her today unless he slept. Not to mention, earlier in the day, he had stationed himself on the sidewalk across the street from her house waiting for her to come out and once she did, he followed her around the neighborhood (on his little orange bike with training wheels).

Of course, she ignored him the entire time, until all of her other friends left and then she came over to see my little man. This was after he cried for at least 30 minutes, broken-hearted from being rejected twice by her when he asked her to come play. She said she would rather play with the older girls in the 'hood. He was totally devastated and there was nothing I could say or do to comfort him. I held him tightly and tried to explain to him the realities of love in only a way a 4 year-old could understand...cars and robots.

I said that boys were like cars and girls were like robots, and robots liked to play with other robots, like the Transformers. I know grasping at straws, but I had to say something, my baby's heart was shattered into a million pieces and I was helpless.

Then he says, "Well Mama, cars and robots play together on the Transformers." GULP. Yes, he was right. He often watched the '80's cartoon with Baby Daddy, so he was the expert. And he started wailing again. I had made it worse. Thanks to me he could feel even more rejected!

I froze. I was speechless. I just sat there and held him, rocking back and forth. It was all I could do for my baby. I thought to myself, what kind of mother was I? I was shocked at my reaction or lack of...

He finally stopped crying and was distracted until after dinner. He then ran outside and sat on his stalker's post, waiting for just one more chance to speak to his love. Minutes later she appeared...seriously it was like a scene from a romance novel. She pulled up on her little pink bike, smiled and asked if she could have a piece of the boterham (sandwich) he was eating.

His face lit up and he handed her the entire sandwich. She sat next to him and he immediately began stroking her long blonde hair. He kept smelling her hair like it was some sort of drug. And he then suddenly turned into a little man. His voice was deeper and he had stars in his eyes. I couldn't believe what I was witnessing. I could have been watching a scene in a pick-up club!

And just as I expected, she finished the sandwich, got back on her bike and rode off into the sunset, down the street to her own house.

I held my breath and waited for the tears to fall again. But this time, he was too intoxicated by her visit, he couldn't stop smiling.

"I know baby and Mama loves you."

"But I love her. What was her name again?"

Errrrggg...and I thought my son would be different!

Posted by Amsterdam Mama at 5:13 PM No comments:

Every week I will add to a series of posts called "More than Red Lights" to share my personal experiences on why I believe Amsterdam is an amazing place to raise a family and why it is so much more than it's international red light reputation! This week's post is just the latest reason why I love this city and why I am so lucky to live here raising my babies!

We had to make one of the most difficult decisions three years ago after I found out I was preggers with #2...whether or not to move out of the city and into the 'burbs, so that the snot noses would have a garden and room enough to play.

We couldn't afford a bigger apartment with a garden on the ground floor in Amsterdam. So it was either a big move to the 'burbs or find something affordable in Amsterdam. We took a leap of faith that our kids would be happy no matter where we chose, and we decided to stay in "the city." We bought an apartment on the first floor with the only outside access being three small balconies. Not practical for the little ones, so the first few years was full of walks down the street to Vondelpark.

But that all changed last week! Baby Daddy hooked us up with our very own (ok we share with two other neighbors) garden in front of our house. We noticed that one block down the street the residents had turned their strip of bushes into a garden with a picnic table and vegetable garden. We thought well if they could do it then we should be able to do the same. After extensive research Baby Daddy found a contact with the "gemeente" or city government and he emailed the guy asking what we could do to have the same "garden".

Immediately the city representative answered us back and set up a meeting to discuss. All it took was for Baby Daddy to send an email around to the surrounding neighbors to have their input, and then the project was underway.

The wasted strip of bushes full of weeds and dog poop slowly turned into our community garden. This city rep pulled out all stops for us to have everything we needed...at no expense to us, we just had to help out. And the city even removed the bushes and tree, put down woodchips, supplied us an old picnic table and wood to refurbish it with and park benches. Ok, maybe it's not for free, but for once I don't mind paying so many taxes. It was amazing how much this rep helped us out. He even came by on a Saturday to help Baby Daddy put up the fence (which he also supplied) and re-work the picnic table. 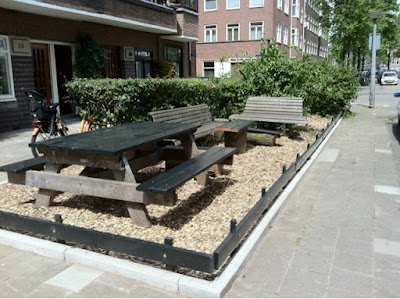 And it was a success from the very first day! We met neighbors we hadn't met in the three years living here. We all sat together, drank wine and the kids had a blast playing in the "garden" and sidewalk. Matter-of-fact one of our neighbors has lived here 33 years and she said this was the best thing ever to happen to this street.

For me, finally after almost 10 years of living in "the city" I feel like I live in a community. I now know my neighbors and we have a place to meet together to BBQ, have a drink or enjoy the sunshine without sitting on the sidewalk. Most importantly, my kids have a little piece of green in the city to play safely in front of their own home! And it is all thanks to the City of Amsterdam and of course all the hard work Baby Daddy put into making it happen!

I know I have said it a 1,000 times but Amsterdam is an amazing place to raise a family and so much more than just a city full of red lights!
Posted by Amsterdam Mama at 7:50 PM 2 comments: There is a lot wrong with this picture! When a preggers friend of mine sent me this link to the Medela freestyle breast pump to ask my opinion, what was left of my nipples began to ache and my ovaries shriveled, taking all the remaining eggs with them.

What kind of advertising is this? First of all, personally I was told you should only milk one breast at a time. Second, she looks like a human cow. Why would they show her standing up like this? Why not in a realistic position, like folding laundry while the baby sleeps or vacuuming? What mother has time to walk around the house all skinny and perfect drinking a glass of wine while she pumps.

Obviously she has a cleaner because her couch is poo, pee and vomit stain free. I think I still have vomit stains on my couch from 2 years ago. Who knows...I don't have time to even check.

Ok so maybe its water in her glass, but then don't use a wine glass in the ad. And if I had to wear this milking machine, I would be taking vodka shots to forget the fact that I looked like a cow!
Posted by Amsterdam Mama at 9:06 PM 2 comments: