I hope my kids put me up in a really chic nursing home one day after what I have gone through to carve them Jack-o-lanterns.

First of all there are no pumpkin patches to load up the family and visit to pick out the perfect pumpkin. Matter of fact, I think the pumpkins are imported from the Lilliputians! Im sorry to say, but the pumpkins in this country are the size of a pumpkin seed in SC. I know Europeans make fun of America because everything is big, but when it comes to pumpkins, Bigger is better! And I should know, especially after trying to carve out 4 pygmy pumpkins for my kids.

I looked everywhere for a pumpkin that was bigger than an over grown apple. No luck and besides being so small ten of them fit into a mopping bucket, and half of them were rotting. In hindsight, should have gotten the rotten ones!

So I got home and invited 2 other kids over for the carving session. The kids had a blast drawing all kinds of things on their pumpkins, like dinosaur mouths and spooky eyes.

They were so excited and started arguing who was gonna have their pumpkin carved first...so I got out the carving tools (aka steak knife and spoon) and told the kids to stand back, Mama was ready to create masterpieces!

I tried to cut the first top. The knife wouldn't even pierce the skin. I tried again and again and I tried stabbing all over the pumpkins frantically. These pumpkins were like plastic fruit. I wasn't getting in!

The kids began to panic and my son asked me if he was gonna have his dino-lantern and of course then the tears poured. His little heart was breaking.

That was it! I was gonna carve these pumpkins even if I had to bust out the chain saw. Which I didn't, but I did try the hand saw. Nope, not even a shred of pumpkin came off. I even turned those little piece of poop pumpkins on their side and saw them in half. Then at least I could get in maybe carve at least some teeth and glue it back together. And my kids would think its normal to carve pumpkins with a saw.

No matter how hard I tried, the saw didn't work either. By this point, my son was sobbing and the other kids lost interest and walked away, thank goodness.

I was now on a mission: I was gonna carve these pumpkins even if it took me all night. And that's when my genius mommy friend came up with a brillant idea: boil the pumpkins to make them soft!

So I boiled up some water and threw in the pumpkins. I had never cooked a live pumpkin, I had always gotten mine from a can, so I had no clue how long to leave them in...obviously, because after my house began to smell like pumpkin soup, I pulled them out. Well let's just say they were no longer medium rare.

I somehow got them to the carving table and held my breath and stuck in the knife. Like Butter! A little too much like butter because with every slice the pumpkin began to implode. My hands were blistering as the steam was still rolling off the pumpkins. Of course I could have waited but 1) I was on a mission and 2) I was too scared if they cooled they would harden again. So I kept carving, 2nd degree burns and all. 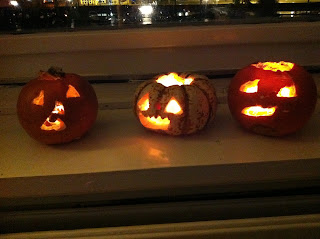 I could only carve 3 out of the 4 or I would have been emergency room bound! By this point, the kids had forgotten that initially they had drawn faces on them and were amazed at what I had created. Yes, I won! All the stabbing, sawing, boiling and charred hands was worth it! My kids were learning the great American tradition Halloween and mommy carved them their first pumpkins that look like they are jacked up on drugs, Crack-o-lanterns!
Posted by Amsterdam Mama at 10:47 PM