The moment I belonged

It was like bolt of lightening striking me on the head - the moment I truly felt like part of the Dutch society.

I have patiently waited for 14 years to have this feeling and I was about to give up, and then BAM: I am sitting at a table with seven Dutch ladies at a cooking class talking about life, love and our family, in DUTCH!

The journey to get to this point in my life started about a year ago, when I became friends with my daughter's school friend's mother. Over the past year we have met for dinner a few times and we cultivated a friendship.

This is something I had hoped for for years. I wanted desperately to feel like I belong here, that I am a part of the community. And I tried a lot of different ways to obtain this feeling, but I was never really let into the tight circle of the Dutch culture. It made me very sad and I always felt like an outsider. I felt like that kid on the playground that no one picks for their team. 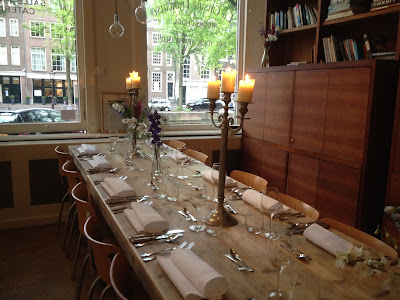 Don't get me wrong, I have made so many friends over the years. Great friends, really special people that have touched my life in many ways. But they are all expats who tend to move away and never really set down roots in Amsterdam. They leave and my heart breaks.

During the past year my friend invited me several times to her cooking club, but I never had the courage to go. However she didn't give up on me and I finally said yes.

I was so excited and also trying to keep my hopes under control. I was nervous because I was the outsider. I was scared by going to the club it would make me feel like more of an outsider. And to put icing on my anxiety cake, my friend - the only person I would know there - was sick at the last minute and couldn't attend.

I almost cried after our phone conversation, but she promised that her friends would take care of me. I was desperately thinking of ways to get out of it, I even took my time getting arriving to the class.

I walked up to the door of the cooking school and felt a bit of symbolism. I felt so small and scared and somehow found the rocks to ring the bell. I was greeted by the sous chef and lead into the most amazing space - a huge modern kitchen and an old fashioned dining room at the far end overlooking the Herengracht canal of Amsterdam.

The ladies greeted me immediately and I felt a warm blanket of hospitality wrapping me up and carrying me into the class. They asked if I wanted to speak English.

"No," I said bravely. "No, I would like to speak Dutch and if I don't understand you, I will ask in English."

The chef/teacher lead me to a table to make a fancy French passion fruit and custard dessert. My assigned cooking partner immediately began to explain what I should do and soon we were cooking side-by-side and chatting about life.

Not even for a second did I feel uncomfortable. I felt like I was with a group of my girlfriends at home. It wasn't until we sat down at the large rustic dining table did I realise the significance of this moment. It was so surreal, this is what I had been waiting for years and it was happening. I was part of a group of Dutch women having a good time, laughing and connecting.

As we ate our four course meal, each one talked about their lives and struggles. Each person had such an interesting story, it was almost magical. I just sat back and listened and tried to contribute to the conversation in my best Dutch when possible.

For a moment I gazed out on the canals watching the boats glide by against the backdrop of the brownstone Amsterdam houses, and I thought to myself life here is good and I as a small town girl from a country very far away, I was so happy to be a part of it, even just for a few hours.
Posted by Amsterdam Mama at 11:54 AM