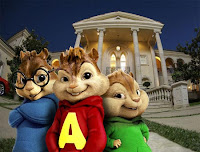 Being a parent of course means making sacrifices. I am reminded everyday when I get dressed and I look down at my cottage cheese thighs and "The scar". But today, I made the ultimate sacrifice when I took my son to the movies and sat through the entire Chipmunks film without screaming, puking or running away.

I would rather five C-sections in a row without an epidural than to ever watch another Chipmunks movie ever again. It only took the first two minutes of the film for my skin to start crawling from the squeaky voices of these glorified animated rats. And to top it off, they werent even squeaking in English. And even though I'm fluent in Dutch, I hardly understood a single word that came out of their little out-of-sync rodent mouths. It was an hour of: squeak, squeak, squeakedy squeak squeak. For me, it was equivalent to an entire day of the teacher scratching her fingernails up and down the blackboard.

And just when I figured out that I could lean back with one ear pressing shut against the seat, my nose began to twitch. No...someone didnt! And then I remembered, I was sitting in a room full of nasty little nose picking, farting, poop machines. Yes someone did. Thank goodness it wasn't my kid. But after the first 30 minutes of gagging I wish it had been...I would have at least changed his diaper or underwear. The parent of the pooper probably knew it would take the rest of the movie to get it cleaned-up. It smelled like one of those, throw- them-into-the-shower accidents.

So I was in H-E-double hockey sticks on earth! My ears hurt, I was annoyed and sitting in a giant toilet bowl gasping for air.

But I looked over at Luca's face in the glow of the theater, I leaned back into my seat and remembered how lucky I was to even be sitting there sharing the moment with him. And then I realized, if it made him happy then I would watch the Chipmunks squeak-out Lady GaGa songs a thousand times...of course next time with ear plugs and vodka shots!
Posted by Amsterdam Mama at 2:37 PM